Following international pressure, the Qatar government has – amongst other things – introduced standards for the construction workers’ lodgings. These standards, however, are not being respected, according to Bhakt Roy – a Nepalese migrant worker who was stationed in Qatar for ten years. 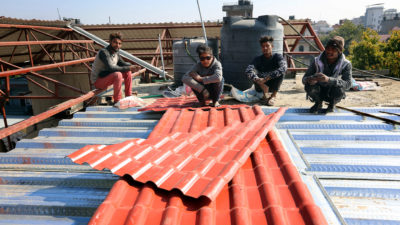 According to him, an employer might claim to have 2000 workers that they can present satisfactory lodgings for – when in reality they have 15 000 workers who live under miserable conditions.

– The discrimination continues, and there are still no human rights. The existence of support groups, however, makes the situation somewhat more manageable, he says.

Travelling to Qatar in 2009 was something Bhakt Roy was forced to do, due to his family situation. As a migrant worker his salary was low – lower than what was stated in his contract – the hours long, the food bad and his living areas insanitary.

I sent home all the money I made, in order to support my family. Since I returned home, I’m not able to work like I could before.

He had no rights, and because of the kafala system (a form of slave contract) he was not able to return home.

– I sent home all the money I made, in order to support my family. Since I returned home, I’m not able to work like I could before, he says.

He mentions mental health problems and other health issues that cause economic problems for him and many others.

Approximately 400 000 Nepalese citizens are working abroad to support their families. The money they send home is an important part of the country’s economy. Many lead hard lives, however, and return home severely injured – or in a coffin.

– It is a big problem that our citizens spend their youth working abroad and come home sick or injured, says a representative for the General Federation of Nepalese Trade Unions (GEFONT).

He goes on by describing how his organization collaborates with the government in order for the hospitals to provide care, support and assistance.

Since recently, there is also an insurance system that provides compensation. In the worst case scenario where the family’s provider is lost, the surviving family members receive economic compensation ­– and not just a coffin.

The insurance also covers suicide and heart attacks which, although not direct workplace accidents, are still consequences of bad working conditions.

It is a big problem that our citizens spend their youth working abroad and come home sick or injured.

The Nepalese unions seek out Nepalese workers in their destination countries and arrange support groups. This is a difficult task in countries where there is no freedom of association, but the unions are trying to find workarounds.

Simultaneously, there are migrant workers in Nepal as well ­– mainly from India.

– Wherever you are, you need to get in contact with your union. That’s why CUPPEC Nepal welcomes all migrant workers from every country as members, says CUPPEC president Naranath Luitel.

The Gulf countries and Malaysia are places where many of the Nepalese migrant workers travel. Getting there legally requires passports, visa, documents and the paying of fees.

This is done at migrant centers, where the unions also play a video with safety and security advice pertaining to migrant work.

In connection with the International Migrants Day (December 18), CUPPEC released a book containing information for migrant workers about what to keep in mind and where to turn for help.

The instructions are sectioned into three parts: Before the journey, during the stay and after returning home.

The unions are pressuring the regime to use their government relations to improve the situation for Nepalese citizens working abroad.

Many workers are denied the salary they have been promised. The contracts they have signed are torn upon their arrival, and they are instead given new ones with worse terms and conditions.

Sometimes this happens due to the Nepalese not having certificates proving their skills and qualifications, leading to them being given other jobs with lesser pay.

In 2019, after long attempts, the unions succeeded in getting the recruitment agents to attend meetings about joint efforts for decent employments.

– There is a vast rift between unions and recruiters that we’re hoping will decrease, says J.B Gurung, president of the construction workers’ union CAWUN.

Our coverage from Nepal was financed by Union to Union, which organizes the international union development collaboration of Saco, TCO, LO and their affiliated associations.